He had to be RUSHED to an emergency vet (Easter weekend!!) with a life-threatening blockage. He was literally screaming in pain and dribbling blood. It turned out that stones are scraping his severely inflamed bladder. He is currently on pain and anti-inflammatory meds, under sedation and catheterized, but NEEDS EMERGENCY SURGERY TODAY. The vet wants to do the surgery immediately, but CAN'T PROCEED UNTIL I HAVE THE BULK OF THE FUNDS. Until then, he must be kept in ICU (sedated, on pain meds and IV and catheter to prevent his bladder from exploding) at additional cost, and every hour means added risk for him. I must have a 75% downpayment for the vet to proceed with the surgery. He will remain in the hospital for 24 to 72 hours (coned, on pain and other meds or possibly sedated to prevent him from removing the catheter) at least, until he is stable. Multiple rounds of bloodwork and urinalysis must also be performed. ​​

PayPal: ​​ http://www.gofundme.com/r24ny9s
​or go to: http://www.homesweethomeanimalrescueoflongisland.org/
​to donate via paypal or mail​. Make sure to note that it is for Nibbler/Elmo

4-7-15 Millie - very sick rescue dog
I adopted a 11 year old Golden Retriever from a Cape Girardeau Shelter. She came with the advice that she needs a spay, is HW positive (newly heartworm positive) and had dry eye. My vet looked her over he said he couldn't believe how sick she was.  She's been trimmed, de-fleaed & put on K-9 Advantix. The vet has been busy with her. Its taken 2 months but her Chronic Trachea Bronchitis is under control. Her worms & tape worms have been treated. For the last 6 weeks she has been on a constant rotation of antibiotics' for her teeth /mouth infection. Over 50% of her teeth are black and need to be extracted. Her eyes are in fact "dry", and since 12/04 she has received 4x a day eye washes, lubricant drops, prescription steroid drops and prescption Ophthalmic Ointments. Oh, both eyes need lower lid entropy surgery for in turned lashes. She is mostly blind in the left eye right now.  Her rear teat has a mammary tumor, and she has a mass in her abdomen (we thought she had puppies in her). When they stapled her lower lids open, she played in the yard a little for the first two weeks, and we heard her bark for the very first time in fun. Then the staples had to come out. I qualified for a low cost spay certificate for her-( I knew this when I adopted her.) Our vet says she is a long term Heartworm treatment candidate. ~With all this info we have been informed that the cost is way over Millies Mommas head, she is needing assistance.

4-8-15 Animal Shelter in danger of closing

Craig Street Cats says if it doesn’t raise $50,000 in donations in the next three weeks it may have to shut down for good.After being forced to move from their Madison Avenue location by May 1, the non-profit that works to humanely reduce Winnipeg’s feral cat population said over the weekend it needs the extra money to pay for an air makeup unit to comply with city code requirements.
“Over 100,000 cats live on Winnipeg’s streets, and the city has no strategy to manage that population,” said CSC founder, Lynne Scott, in a release. “Craig Street Cats is the only organization actively working to humanely reduce the number of cats living on our streets.”
​​​
PayPal/charge card: http://www.craigstcats.ca/​

The thin, badly wounded ghost with blood on her face? Most people didn’t see her; those who saw her didn’t care; and those who cared didn’t do anything to help. As soon as we learned of the ghost we set off to find her. Days after the news item was shot and aired she was still there, weak and helpless, with a head wound that had become more infected and, with a pile of meager bones somebody had generously left her. We named her Niyah, meaning “purpose, radiance”. We approached her but she ignored us, engrossed in what must have been her first ‘food’ in days. The bones seemed more precious to her than her own life. Her fur was matted and filthy and God only knew what pain was hiding underneath it. A huge open wound gaped on the left side of her face, blood and puss dripping from it. The smell of death lingering. Niyah was in urgent need of help. We rushed her to our clinic immediately.  Niyah had been somebody’s dog. She had been somebody’s loyal, kind companion, but was now neglected and abandoned. The more we know about this beautiful, kind-hearted soul, the more tragic her story becomes. After gently cleaning and shaving Niyah and removing hundreds of ticks we see the real effect of neglect and human apathy. We found that Niyah is emaciated and covered in hundreds of small wounds. She had several cuts on her hind legs and the hole in her head went right through to her ear. We are taking care of her wounds. She is scared. She doesn't know what's happening. Yet, she is sweet and gentle. Please don’t be one of the hundreds of thousands who saw her pain and looked away. HELP US SAVE NIYAH! Donate to her treatment:

This beautiful orange boy had been hanging around and being fed by some kind people, giving him lots of love and attention. They said he was super sweet. But today he came crawling to them for help. They saw that all four of his paws had been burned!
The poor guy, who they named Arrow, was in terrible pain.
They called us for help. We immediately went to pick him up and took him to Kenosha Animal Hospital. The skin on his feet was actually sloughing off and blackened, most likely from a chemical burn. They said he was fine yesterday and today he was burned. He also had a fever of 105, which indicates an infection. Normal is 102 for a cat. We believe someone maliciously burned him. There is a rumor going around that he scratched someone and they were getting even with the cat. How cruel! The CSO officer has been called in to investigate further. We are hoping someone comes forward with more information. This poor guy did not deserve to be so maliciously abused like this!
His burns have been debrided, cleaned and bandaged. He has been given antibiotics and pain medication. He was also neutered today.  He is resting comfortably tonight and is safe. No one will ever harm him again! ​​ 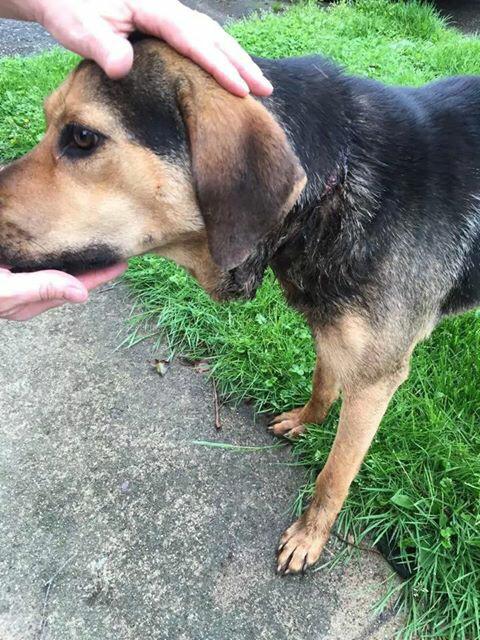 We received a call late last night about a dog in Logan wv with an embedded collar. He will be heading to the vet this morning. Guys he will have to be our last medical case if we don't get some help on our vet bill frown emoticon it's sad but it's true. We have been slammed hard with medical cases in the last two months and anyone who rescues knows those are not cheap. Please if you can help please call Knowles Animal Hospital 304-752-8387 or paypal: thepawssquad@yahoo.com. We do not want to turn away any animal in need of medical attention but we now find ourselves in that situation. No amount is too small to help save a life. *****UPDATE******
They were able to get the collar off and clean her neck but as you can see she has a ton of swelling and a pus pocket. She has to have surgery as soon as she can. Please if you can help her out please call Knowles 304-752-8387. Or PayPal thepawssquad@yahoo.com
​​