​​Milo is a survivor. He was being chased by a dog and that he fell 2.5 metes onto a cactus plant. The injury at that point was not too bad but after 3 years of avoiding capture the wound deteriorated and he's been left with serious facial injuries.
Happy Pets has been trying to catch him so that he could get the vet attention and help he clearly needs. That happened this week and now starts Milo's journey to recovery. He has been taken to Valencia to see specialists in facial trauma and initial results are encouraging and it's hoped he will undergo facial reconstruction.
That's the good news. The downside is that the bills will be significant and whilst Happy Pets are doing everything they can for him they are a relatively new charity and they need both help and financial support to ensure Milo gets the best chance of a happy ending.  Happy cats rescue and Milo are in Spain so there is no 501c3 designation. 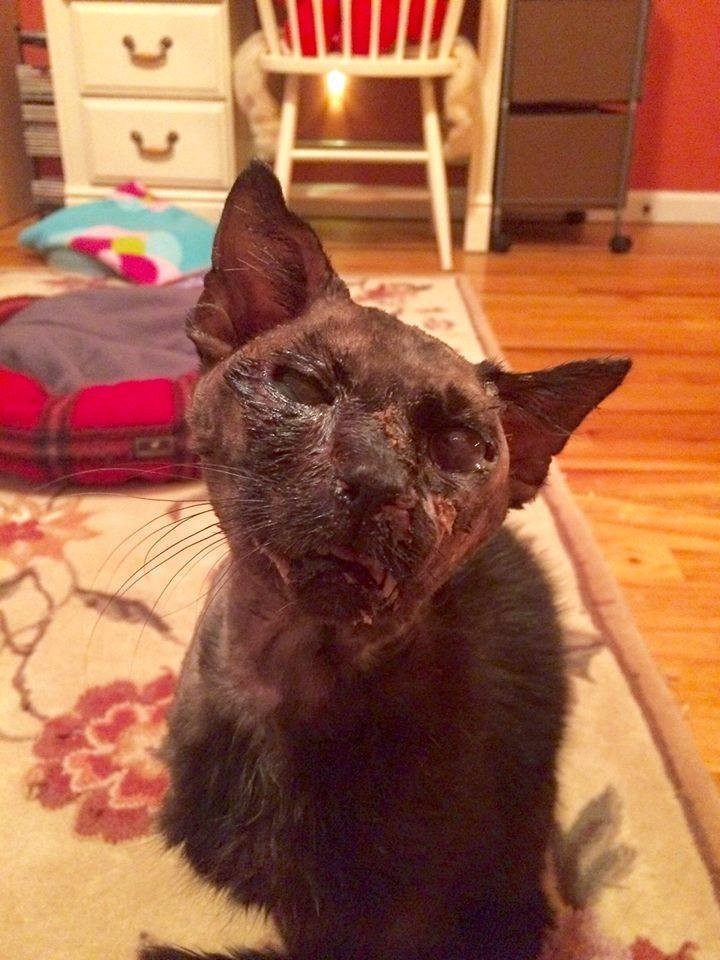 Nebula's entire body was purposely burned with a chemical. To add to the cruelty and abuse, he was forcefully kicked and suffered tremendous blows to his head, has a broken jaw, broken teeth, a ruptured eye and an ulcer on the other eye which our vet believes it could also be due to the trauma and an broken nose. Like if all of the above isn’t enough there are a zillion of things going on with him internally also due to all of the above, one of the issues being non-regenerative anemia.  She appears stable for the weekend and is eating, but it is a challenge for her due to facial deformity and congestion. She has clear evidence of trauma to her maxilla with fractures and a ruptured left eye as well as some kind of chemical burn that has already done a majority of its healing. She has sneezing fits of bloody/pus like mucous from her nostrils. She is very thin. He has a very long hill to climb but is very sweet.  To see Nebula "forgive" humans despite the inflicted torture, inflicted injuries and the pain and suffering that he endured and terrible abuse, just gave me so much pain in my heart that i cannot really describe or put into words. Despite all that he endured, he has a strong will to live, all he wants is to be loved all he wants is to purr in content, he is happy to be alive and so darn grateful to have been rescued. As of now he has a terrible URI and bloody discharge so the plan is to get that under control before going into deeper diagnostics and surgery. His one eye needs to be removed, his other eye is ulcerated, it is unclear if the ulcer is from the trauma or from something else at this time. He has suffered a tremendous blow to the jaw, skull & nose and so an MRI is needed in a week or so to determine the extent of the damage. A consult with an internal medicine veterinarian is already in the works. His teeth that are broken need to be pulled and we are hoping that with good food and TLC from his wonderful foster Mom his anemia will resolve in due time. He has a long road ahead of him but his love for humans and will to live is so there & that alone will play a huge roll in his recovery. HHR is a 501c3 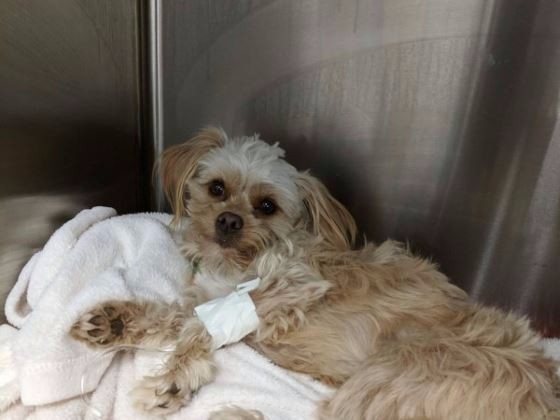 10-08-17 Figi aka Kujo dog hit by car
​
On the evening of October 5 a Good Samaritan witnessed this sweet little boy get hit by a car in Herriman. Many of you may have seen her post going around trying to find his owner. He was in a Halloween shirt. (I thought his name was Fuji, but its Kudjo for those that shared my post.) The Good Samaritan stopped and picked him up. After evaluating him she drove Kudjo to Willow Creek Animal Hospital to be stabilized. All this time the search was on for his owner. Shortly after he arrived at the vet we were able to locate his owner. The owner went straight to the vet and was able to take him home with some head swelling and medications to keep him comfortable. The following morning he was not wanting to use his back legs. He had little motion and by the afternoon not at all. The family decided it was in his best interest to surrender him to a local rescue where he can have a second chance. Please know that re-homing him was already a conversation in their home before the accident. It was not an easy decision, but a necessary one. Utah Animal Advocacy Foundation has graciously taken him into their program, but they are small and will need help financially to determine the extent of his injuries. Which could end up in the $1,000's. He is currently at Cottonwood Animal Hospital needing an MRI. We need to raise funds fast! Any size donation is appreciate and of course sharing his story helps too! The Utah Animal Advocacy Foundation is a 501c3 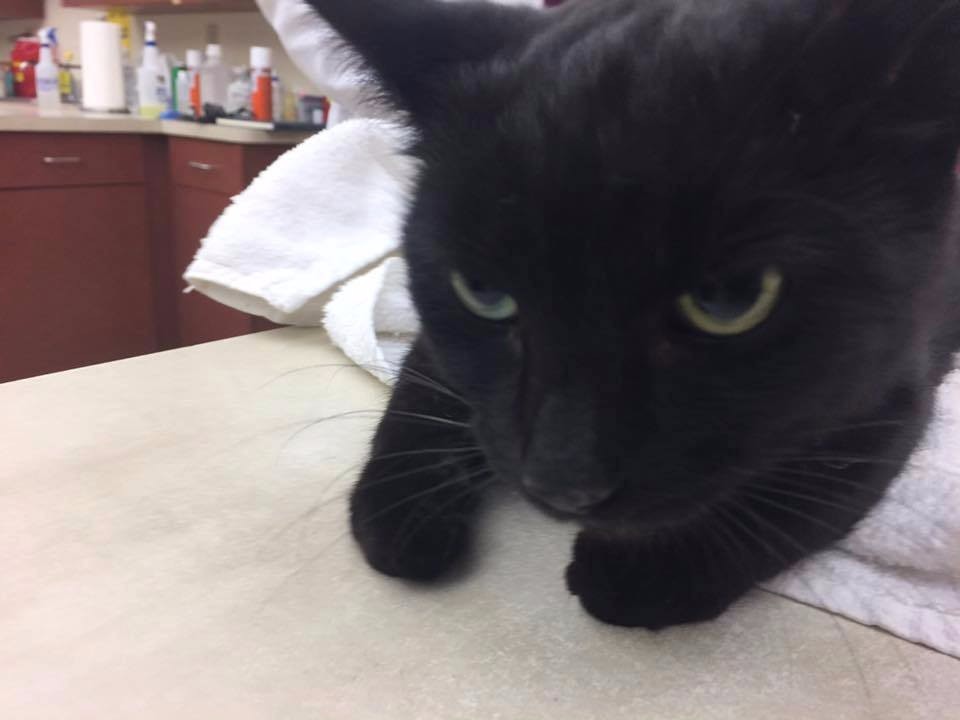 SCOOP volunteer, Ryan Collins, rescued a kitty hit by a car tonight. She is from a colony that he assisted last year and he was contacted by the feeder tonight. Her pelvis is dislocated and she needs emergency care. She's at Grady Hospital where her bill is increasing. Grady Hospital will not continue to treat her unless funds can be raised and they are paid immediately. SCOOP is assisting, but does not have sufficient funds for this type of emergency. No amount is too small and donations made via SCOOP's PayPal account (email@scoopcat.org) will go directly to Grady Hospital. This hospital is refusing to accept payments over the phone due to the inconvenience. SCOOP is a 501c3

FRIENDS WE NEED YOUR HELP!!!  This poor girl has been attacked by something.
She is at the vet now, but we need funds to cover her stay and surgery to remove her tail!!
Estimated Cost is $800 The skin around her tail is dead, and it will be very tedious to try to save her life!! Their were So Many maggots :( Please Help Us Help her!!! Her name is Zoey 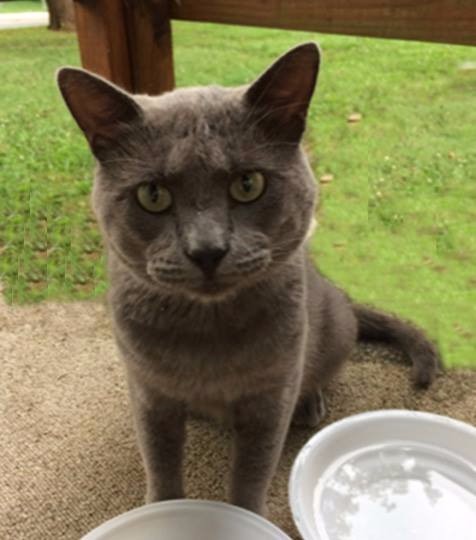 This gentle old soul was dumped when his owners moved. He has a BIG problem: he has a mouth full of infection and stomatitis. He is currently on antibiotics in preparation for his necessary dental surgery. (Low estimate of $825.00). He has so much infection his whole head is hot. If you could find it in your heart to donate to his surgery I would appreciate it. I am not a rescue; just an ordinary person trying to make a difference one cat at a time. (Rose Beam)

At Southern Counties Rescue, we believe with all our hearts that every animal deserves a chance. When Sammy Boy came along, he didn't just tug on our hearts, he reached in and claimed them as his. Throughout his entire ordeal, he stayed the sweet, loving cat we have come to know and love. He arrived with what the doctors called a para-lumbar abscess. Basically, he had an infected wound from just above his tail all the way up his back. The first doctor we took him to told us to euthanize him after examining him for all of five minutes. We promptly decided to ignore the doctor. Sammy was obviously not doing well, but he was eating well, purring and making biscuits. The doctors at our favorite specialty hospital believed they could help him. The surgeon told us that he was one of the sweetest cats he had ever met!! During Sammy's stay at the hospital, he had surgery to clean the wound of the infected tissue, sutures to repair the wound and lots of medicines. He had two different bacterial infections and is currently on two antibiotics. The "straws" you see in the picture are actually drains to help the wound heal. He requires considerable post operative care, but his foster mom and her daughters make sure he gets everything he needs....including some special treats so he knows how wonderful and loved he is.
We are asking for any help anyone can offer to help offset the cost of his surgery and hospital stay. Our rescue is small and does not have funds to support extra expenses such as Sammy's treatment. Our adoption fees barely cover the cost of a healthy kitty and in rescue a healthy kitty is rare. Any amount anyone can contribute is greatly appreciated. No amount is too small. We will be posting progress pictures and reports on Sammy. He looks pretty bad in the picture, but he will soon be sporting a handsome black coat!​​  (Southern Counties Rescue is  501c3) 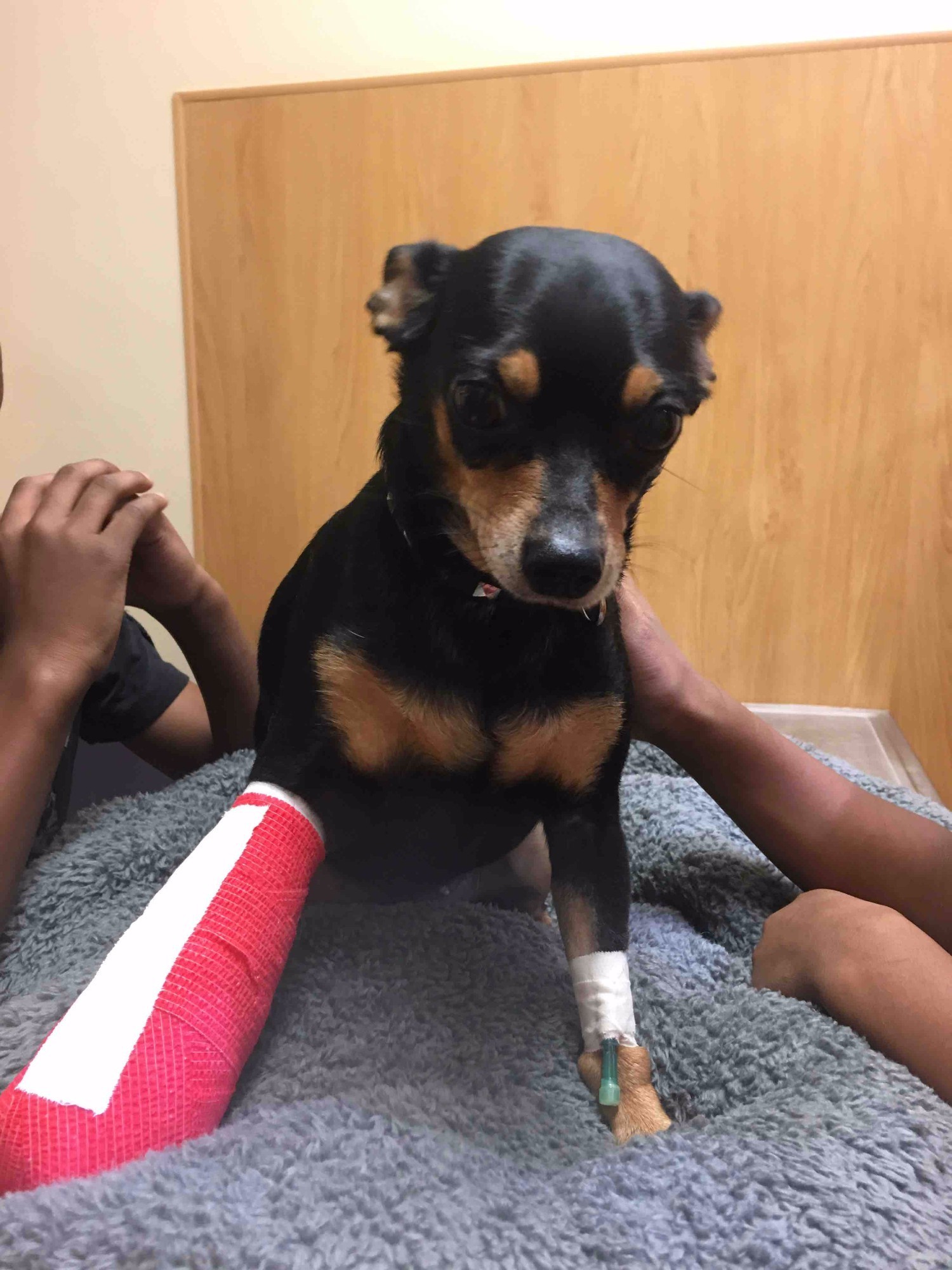 Kandy Gurl was hit by a car and needs extensive medical care. Her family cannot afford the care she needs

Lovey is paralyzed due to a domestic violence incident. The boys are her cousins. They had been in foster care for 5 years until she became their legal guardian.

Kandy Gurl is therapy for the whole family. The boys are dealing with a lot of issues from their past. Lovey has a lot of health issues. Kandy is there for them, helping them all.

Any amount you can spare would be greatly appreciated. Thank you!!​​ 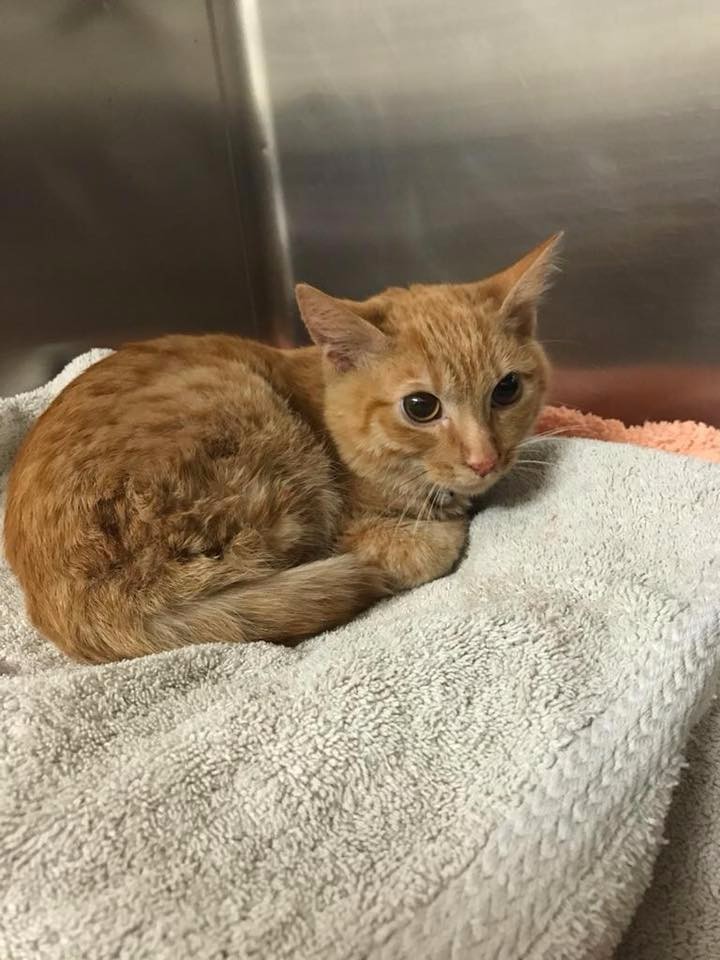 A good samaritan who came across a post from a woman who's kitten was attacked by her dog and stepped in to help prevent euthanasia. Not understanding the full extent of his injuries, he was taken to Cottonwood Animal Hospital where it is going to cost $2,500-$3,500 for surgery/treatment. His jaw is broken and his front teeth are gone. He was going to be euthanized but the owner kindly surrendered him. He is about 6 months old, and we’re calling him Buster. We just found out he needs a specialist to repair the bad break. Unfortunately we won’t be able to proceed with surgery until we’ve raised the money.   **UPDATE** getting an estimate for surgery and looking for a rescue group to take this baby on.